We cannot direct the wind, but we can adjust the sails. – Dolly Parton

This is one of the pictures taken during that top secret scouting trip a couple months ago. I’ve since been teased endlessly for wearing a wedding dress… for questionable purposes. 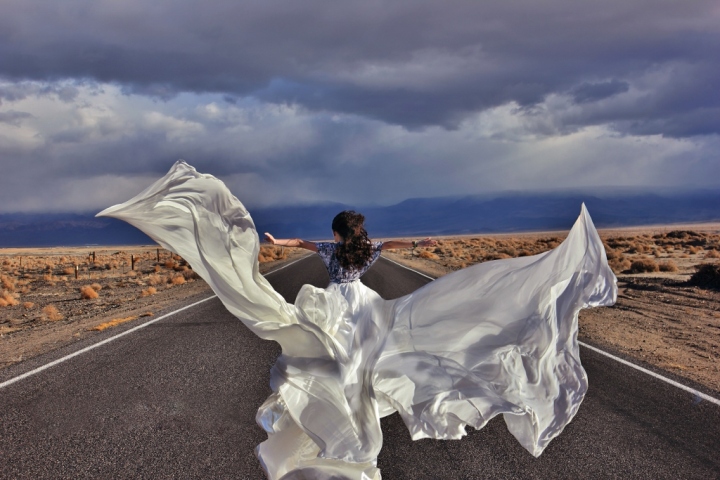 It’s not like I’m in such desperate need of a marriage ceremony that I must carry proper attire should the opportunity present it’s self. No, it’s just that the dress makes for epic pictures. It’s a great reason, right? This is probably the third dress. The way fabric flows seemingly without gravity is delightful. I’ve always wanted to replicate the look from my Pinterest board but wasn’t sure how until now.

How we got the shot:

My friends and I left home in the wee hours before the sun kissed the earth. Eventually, we reached an area known as ‘Olancha’. At the time, the weather was so bipolar that we’d experienced snow, rain, sun and scorching heat all in one morning.

At Olancha, the wind blew our vehicle back and forth across the road. We were almost stupid for getting out of the car. Our bodies were slapped around like reeds and the reflector was useless, least someone go parasailing with it. Tripods for a self portraits were also out of the question, even with sandbags, the whole contraption would have been knocked over. For a couple minutes, I ran up and down the road like a nut house escapee until we were satisfied with the shots. Then it was time to go; we weren’t really interested in joining the approaching tumble weed convention.

In case you haven’t seen the other pictures from that day, the dress’ train isn’t actually as long as conveyed through the image. In the original (not shown) the dress actually blew up past my ankles, exposing black leggings. I extended the fabric in Photoshop by adding segments of the dress from other pictures taken with the same lighting conditions.

Then ta ta! I’m actually excited about this one, it’s a Pinterest success!