I woke up Sunday morning, unable to move with ease. After a quick inventory, I discovered that my left leg was covered in scratches  poignantly stinging at the slightest touch. Among the other discoveries was a swollen right knee highlighted in a shade of purple, mosquito bite on the left arm and soreness creeping across my right shoulder. It took a few hours before I noticed the poison ivy…

“What are you doing on the 19th?” they’d asked, and while I’m the kind of person who favors a walk in the wilderness on the anniversary of my birth, there was nothing specifically planned. “Ok, good. Don’t make any plans, we are going to kidnap you.”

The night before the birthday, my guy friends showed up and off we headed. Upon my request, my little cousin came along as well. I cherished her company as we were the only girls. My parents thought we were headed for Vegas, but I knew better.

Originally, the guys planned to go rock climbing. Unfortunately, there was a home invasion in which the suspect fled at 100 mph on the wrong side of the freeway. A helicopter shot down the vehicle and as a result we almost got stuck in an overnight traffic jam.

We dislocated our vehicle’s bumper by venturing into a desolate mountain path in an attempt to reach our destination. A group of drunk men looked up in surprise as we successfully reemerged from the rocky experience.

After playing catch with a tennis ball in the living room, it was decided that I needed a few lessons in the art of wrestling. You know, in case I decide to visit Skid Row or something.

My little cousin, myself and one of our friends wanted to go for a walk in an orange grove. Our other friend who’d accompanied us did not want to take chances among the trees. Instead, we explored the neighborhood and even climbed up a tree in someone’s front yard.

The younger girl and I ran ahead of the boys so they wouldn’t see us venturing into what we thought was an orchard. We returned when they flashed us with a spot light. Next, my cousin and I jumped a fence into a playground. The boys joined us after they noticed the fitness contraptions we’d discovered along the edge of a field. 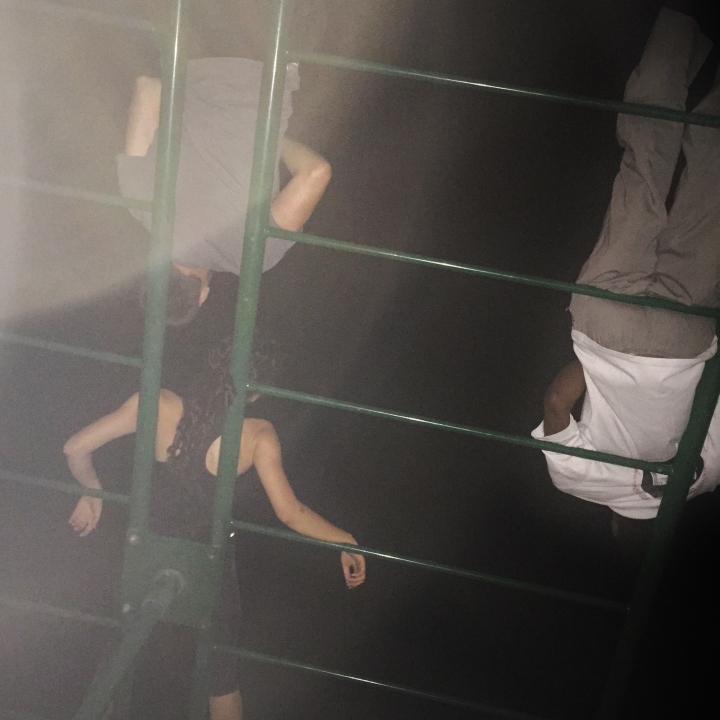 We climbed on top of the monkey bars and drifted off to sleep while searching the sky for shooting stars. Thankfully nobody fell from the bars, the fall would have been devastatingly high.This probably tops the time I fell asleep on a table in the middle of a cow field while photographing stars.

After Sabbath School, my cousin and I climbed over a wall into the church’s preschool. We talked about ‘acting mature’ but then proceeded to try out the freestanding teeter totter and raced tricycles down a hill. We somehow managed to sneak out without tearing our dresses.

Group nap during another friend’s goodbye party. We woke up to people taking pictures of us sleeping.

I decided to take a nap on the side of the road while the guys were trying to figure out the directions to a climbing spot in the mountains. My cousin knelt beside me and the next thing we know, a police van full of inmates stopped to ask if we were ok. 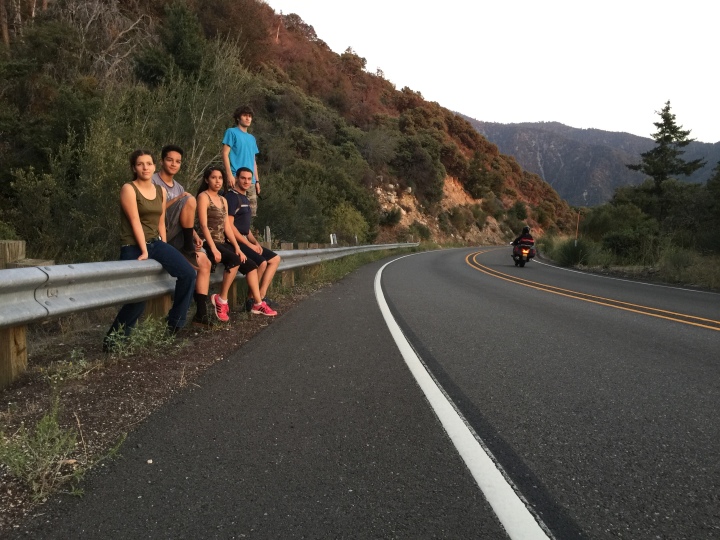 We climbed down to the ‘Creek of Misery’ and stopped questioning the name after getting tangled in blackberry vines and attacked by swarms of gnats. The scenery was beautiful though.

We couldn’t find the rock climbing spot so some went bouldering while others climbed trees or learned to whistle on acorn shells.

The driver stopped at place that usually has hammocks. This time, there were none up. Instead, we swung from rope swings and emptied our pockets before turning cartwheels on the grass. When the sky faded into darkness, they turned on the spotlight. Some sat on bleachers while others took turns wrestling.  Then they showed my cousin and I how to jump into a roll. We took Slow-Mo videos of the guys doing tricks. When it was our turn, my cousin was able to jump over someone laying on the grass. I couldn’t do it for the fear of falling while diving for the roll after the jump.

The group drove up to a friend’s house but instead of going in, we hung out on couches the neighbor was trying to give away. The guys became upset when my little cousin and I placed a couch in the middle of the road as one of them had jokingly suggested. Hey, hey, it was a photo concept I’d like to recreate in the future!

I climbed on the back of a Vespa for a ride around the neighborhood. I was enchanted by the lack of hair blowing in my face as it does when windows are rolled in a car. At some point we tried to race a car up a bridge and almost won.

Upon our return, I was lead into the house. The inside was decorated with pink and green ribbons hanging over the biggest olive and pineapple pizza I’ve ever seen in my life. The boys wished me happy birthday. We laughed at each other as some used casserole dishes, pot lids or paper towels to substitute for the lack of plates. 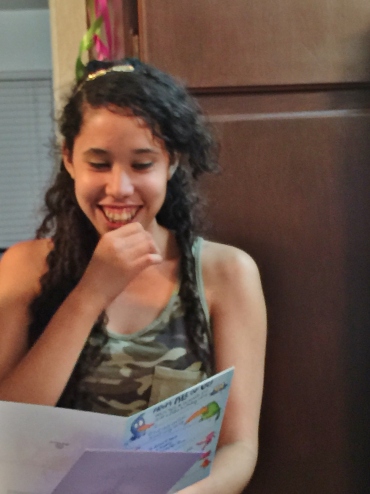 I walked into the kitchen and my friends started singing happy birthday. They handed me a card and let me cut the first slice of oreo cake. The rest of it had to be meticulously calculated to allow everyone an even slice. 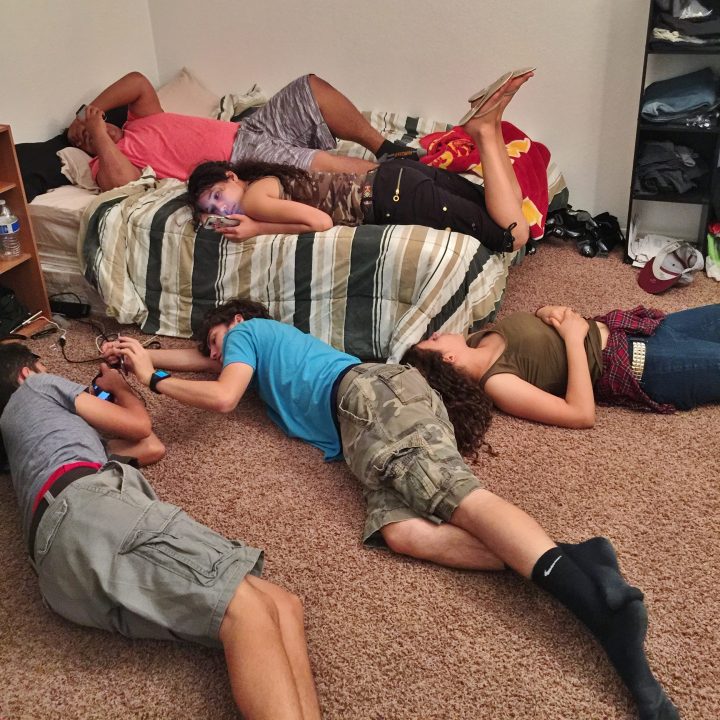 My friend’s mom walked into her son’s room to find us all passed out on the floor. “You guys can spend the night,” she invited, but we got up reluctantly because three of us had already missed curfew.

Exhausted, I fell asleep in the trunk of someone’s car because they’d laid out a blanket.

One by one, everyone got their back-packs from the back as they were dropped off at their homes. My little cousin didn’t get in trouble because her parents weren’t home. One of the guys though, got a call from his dad in China in regards to his whereabouts. I got a text from my mom but didn’t see it because I was stumbling trough the gate into my house.

The next morning, I texted my little cousin:

“I feel like we kidnapped you this weekend, getting you home all late and stuff.”

“It was fun though.” she said.

“I’m so glad you were there! Otherwise it would have been JQ and the five guys O.o”

Despite all the minor injuries which could have been prevented, I love my guy friends to death. They are certainly the best and their company was more valuable than a trip to Vegas.  I’m not sure who else would have been down to keep me entertained for more than 25 hours!

One thought on “The First 25 Hours of my 23rd Birthday” 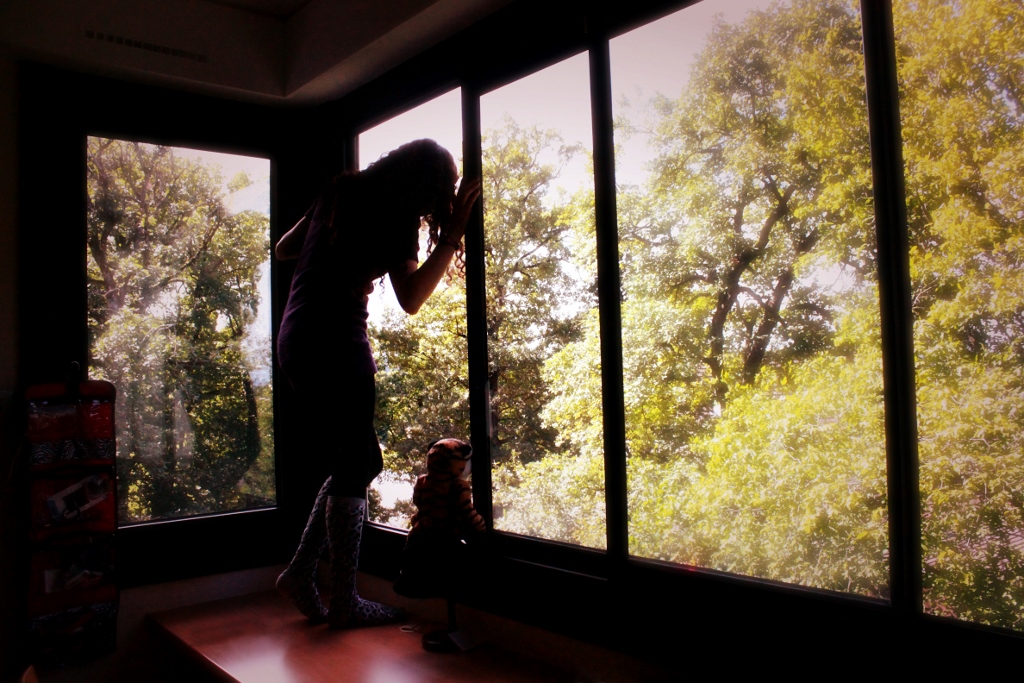 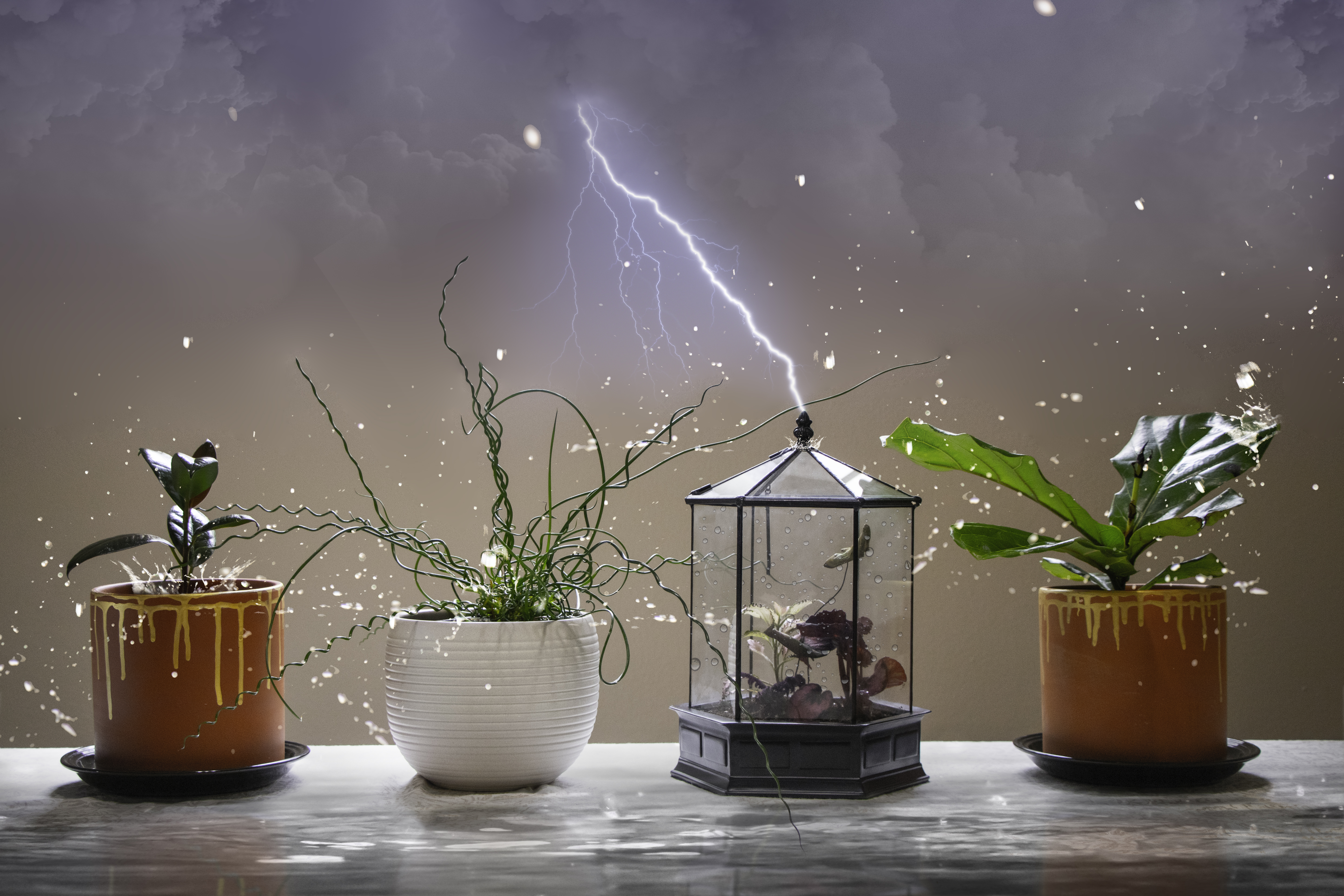