Victoria and I discussed various media projects at the beginning of summer.

Goal: rise awareness about human trafficking and advertise for the Homeland Revolution at the University of Redlands.

As we talked about the cause – one of the things that kept coming up was the realization that anyone could be a victim but no one may ever know. Too many times, people associate trafficking and slavery with the images of girls tied and bound overseas. Unfortunately, human trafficking is a world wide problem and is not always as stereotypical. Yes- that means that it happens in your city too, maybe even to someone you know. Because of this, it was decided that all the models we used for the project would remain anonymous unless they choose otherwise. The point is that we don’t know who the victims are – and it literally could be anyone.

I think our original plans were a little too ambitious. Out of the six media projects we came up with, only two have been completed. It takes time though, and people. People are hard to communicate with over the summer.

This particular photo series was scheduled for one day and funny enough the one I couldn’t make. Taryn Sutherland, a photography major at the U of R, took over for the day. 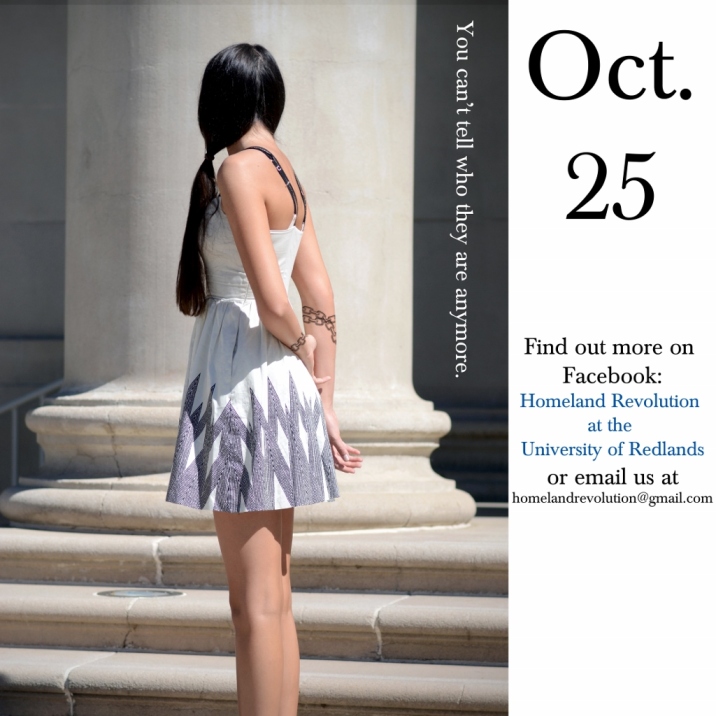 Unfortunately it was impossible to  complete all five images in one day. Yeah, I know, what were they thinking!? Well, apparently the actual photoshoots for the two images took less than 15 minutes.

Victoria asked me to finish up the project so I went over last Thursday to work on the last three shots.

There was a time limit. We hurried from one location to the other. Pictures were taken in such record time that even I was surprised. The only issue we had was with the image out on the field. It wasn’t late enough in the day to be taking pictures. Even worse, the sprinklers came on!

In the evening, Taryn came over to meet me and work on pictures. We edited the backgrounds: desaturation, color correction and words. Sometime later, I added chains to all the models by Victoria’s request.

On Friday morning, we put in the rest of the information. Originally, the font was all the same but I decided to use the logo font for the name.

All done! Posters should be printed and up in no time 🙂